It is the weekend that you have all been waiting for.  The Fort Lauderdale Air Show kicks off tomorrow, April 30th.  It will go on for two spectacular days with so much for everyone to see.  If you have never been to an air show before, this is definitely the one to see.  You will not be sorry.

You can rent your own private sandbox on the beach.  You can reserve your location of a sandbox which are 10 feet by 12 feet.  Here you will be able to relax in the sun and sand with your friends and family.  You can bring your own chairs, or you have the opportunity to rent a premium box that includes chairs.  These sandboxes are $229, and this price includes admission for four people.  This price also includes restrooms with hand sanitizing locations just for sandbox guests as well as food and beverage stands for you to purchase food and drinks to enjoy while you are at the air show. 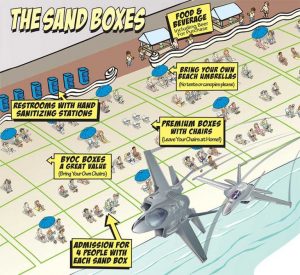 If you choose to bring your own chairs then the reserved spots are closer to the parking area at Galleria Mall.  This way you will not have to haul your chairs too far.  If you reserve a premium sandbox, then they will be located closer to the air show center.

The Flight Line Club VIP will cater to you for the weekend.  The air show center will host a catered lunch with tables under tents for your dining experience.  You can also get away from the sun here.  There will be a beverage bar that will be open all day and include wine, beer, soft drinks, and plenty of water to keep you hydrated.  Once the air show starts, just got sit on the beach and enjoy all of the jets flying over your head.  This experience can be yours for $199 and includes so much!  Kids ages 3 to 12 can get into the show for just $169.  You get a private beach, complimentary beach chair use, high-quality music, a professional narrator for the air show, reserved VIP parking passes, and a catered lunch from 11:30 a.m. to 1:30 p.m. with endless drinks of your choice.  The Flight Line Club is now right between Thunderbird Show Center and Air Show Center. 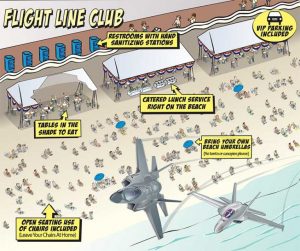 You can also purchase a ticket for $35 for a seat at the We Florida Financial Drop Zone Beach.  There will be portable restrooms with hand sanitizer right on the beach for you to use.  Food, beer, water, and soda can be purchased on the beach, so you do not have to miss any part of the show. 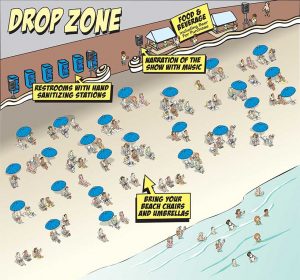 Tickets can also be purchased for $499 for a seat at the Pelican Grand VIP Penthouse in the luxurious ballroom.  These tickets are the cream of the crop for this year’s air show.  Your seat will be on the rooftop balcony directly on the oceanfront with a panoramic view of the jets at eye level.  You can sit outside on the balcony or go one level down into the air-conditioned ballroom where you may be more comfortable  Your meal is catered with an open bar.  The air show will be professionally narrated for you.  Food stations, hors d’oeuvres, music, name-brand liquor, and valet parking are yours to enjoy during the air show.  You will also get a program of the event as well as a commemorative credential so you will always have a piece of the show with you. 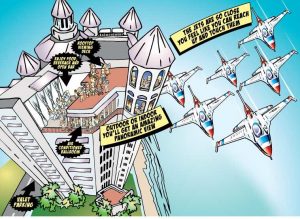 Tickets for the show can be purchased at www.fortlauderdaleairshow.com.  Gates to the show open up at 9:00 a.m. with entrances located north of Sunrise Boulevard and A1A intersection.  For more information, you can contact Air Show staff at (954) 241-7937 or email them at lauderdaleairshow@completeticketsolutions.com.  You can watch the air show from numerous areas.  There is the Pelican VIP Penthouse, Flight Line Club VIP, The Sand Boxes, or Drop Zone Beach.  No matter what area you choose, you will not be disappointed.  All of the performers have been doing this show for years and have perfected their craft for all of us to enjoy.

The U.S. Air Force Thunderbirds will be flying the F-16 Fighting Falcon.  The pilots will be performing a combination of formation maneuvers and solo maneuvers in a high-energy show. The four-jet diamond can perform precision formation flights with the wingtips as close as 4 feet apart while performing loops, rolls, and high octane turns! Two solo jets will be performing high-energy maneuvers together and from opposite directions closing in on each other as fast as 1,000 mph. Then the six jets will come together in a delta formation for the finale of their show.

The F-35 Lightning II, also known as the Joint Strike Fighter, is the most advanced stealth fighter in the world. The capabilities demonstrated by the Navy F-35C will showcase the awesomeness of their C model. This model has a wingspan that is eight feet more than the Air Force’s A or B model STOVL model.  The demo will also include a simulated carrier landing that it was specifically built for performance.

The A-10 Thunderbolt II, also known as the “Warthog,” is a single-pilot attack aircraft designed for short takeoffs and landings from any airfield.  The entire aircraft was largely designed around its nose gun which is a 30 mm Avenger cannon. The seven-barrel rotary cannon measures nine feet long and fires 30mm armor-piercing shells at a rate of nearly 4,000 rounds per minute! As a result, it has been given the nickname “Tank Killer”. The Avenger cannon also represents over 15 percent of the aircraft’s weight.  When the gun is removed for maintenance, the A-10’s tail must be supported to keep the nose from tipping up.  I would definitely not want to be on the receiving end of one of those shells!

The F-18 Rhino Demo Team flies the F/A-18F Super Hornet in a 15-minute demonstration of the Navy’s workhorse carrier-based fighter.  This twin-engine aircraft puts out over 40,000 pounds of thrust in an outrageous show of what this thing can do.  Its speed and maneuverability are a sight to see for a fighter jet that was originally developed over 40 years ago.

The V-22 Osprey is a versatile tilt-rotor aircraft flown by the Marine Corps. This aircraft operates just like a helicopter when taking off and landing. The nacelles rotate 90° forward once airborne which converts the V-22 Osprey into a turboprop aircraft. As a result, the MV-22 is able to operate off of aircraft carriers and smaller ships.

The Navy Legacy Flight will have two F-35C Lightning IIs and an F4U Corsair in a three aircraft formation flight.  These aircraft will show just how the past and future of Naval aviation is alike and yet advanced. The aircraft will make three formation passes and then do separate high-speed passes by the F4U and the F-35s.  Don’t blink or you might miss them.

The Florida ANG F-15 Eagle is a twin-engine tactical fighter jet that was primarily designed for air combat. It is among the most successful modern fighters, with over 100 victories and no losses in combat.

The Air Force Reserve F-16 Viper is the Cadillac of the United States military fighter jets.  This jet is a single-engine, single-pilot jet.  It is highly maneuverable and extremely fast. Two F-16s from the Air Force Reserve 482nd Fighter Wing will perform a formation flyover followed by an airfield attack simulation!  You will definitely want to be paying attention to this part of the show.

The Red Bull Helicopter is one of a few helicopters in the world that are actually certified to do aerobatics. The highly modified BO-105C helicopter can do all kinds of tricks.  They include barrel rolls, loops, vertical climbs, nose dives and can flip forward and backward. Pilot and Red Bull athlete Aaron Fitzgerald will be the one showing off his skills as well as the skills of the helicopter.  He has flown helicopter stunts for over 100 films and shows.  He officially joined the Red Bull team in 2018.

The Huski Offshore Racing Team has a 50-foot Victory catamaran that is powered by two 1,100 horsepower engines.  These two engines give the catamaran the possibility to go as fast as 170 mph!  You better hold on tight if you are on this vessel.  You’ll see it literally fly over the water as it crosses over the water challenging any airplane in the sky that wants to race it!  That should definitely be a sight to see!

The Coast Guard search and rescue demonstration will show us just how they perform an out-the-door water rescue of a person in need of assistance from a helicopter hovering overhead.  The demo begins with one Coast Guard rescue swimmer jumping from the helicopter as it hovers 20 feet above the water.  The swimmer will simulate how to stabilize the person in need of assistance before hosting them up into the helicopter.  It is a lot more exciting to see in person than how they perform it in the movies.

Kirby Chambliss is a five-time winner of the United States National Aerobatic Championship and a former Men’s Freestyle World Champion. He is also one of only two American pilots ever to win the Red Bull Air Race World Championship. Kirby and his Red Bull Edge 540 aircraft must sustain a radical span of 18 G’s.  To do this, he follows a specific routine of skydiving and motocross to stay in pristine shape.

Michael Goulian is one of the top aerobatic pilots in the world.  He began his career in the competitive world of aerobatics which earned him the privilege of becoming one of the youngest pilots to ever win the United States Unlimited Aerobatic Championship.  He was only 27 years old when he accomplished this.  In 2006, he joined a group of pilots competing as Team #99 in the Red Bull Air Races.  Mike’s performance mixes heart-stopping tumbling with aggressive, demanding precision aerobatics.  You do not want to miss out on his performance.  You will want to write home to your family about his show.

The Red Bull Air Force team is made up of the most accomplished and experienced aviation experts in the world. The team specializes in coordinated aerial jumps and always pushes the limits of human flight.  They rethink what is possible and then come up with a way to present it to the world.  They believe humans can fly and relentlessly pursue that which is thought impossible, then go and do it.

No matter who your favorite pilot is or what your favorite aircraft is, you will thoroughly enjoy this year’s Fort Lauderdale Air Show.  No matter where you choose to sit and enjoy this air show, you will not be disappointed.  As long as you can see the sky clearly with nothing in your way, then you will definitely see the air show of the year.  Fort Lauderdale, Florida is going to be busting at the seams with fans that will flock to the beach to see the sky.  There is going to be something for everyone here and no one will be disappointed.  Get your tickets now and go and enjoy the air show. 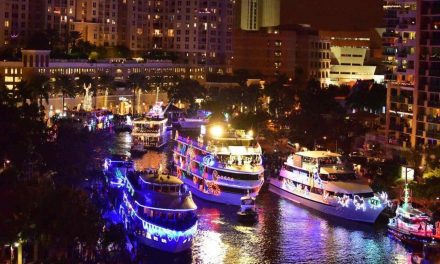 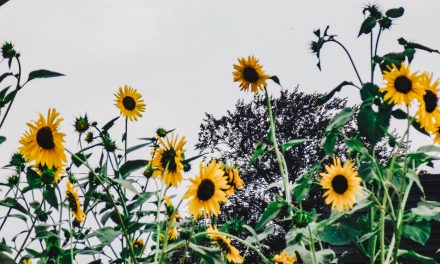 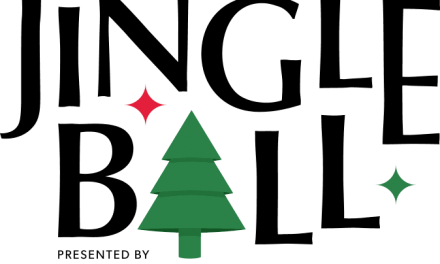